I chose hugelkultur because it was said to be very water efficient, with some people claiming that they did not have to water at all. So how did my hugels perform?

Hugels excel at retaining water. I watered less than in my previous gardens, but the plants were healthier and more productive.

With the success of my hugelkultur garden I’ve concluded that the key to success is water. Lots of water, or the efficient use of it. 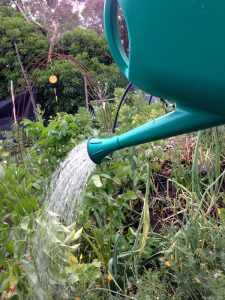 I’ve been trying to grow gardens along permaculture principles for nearly twenty years. I started with Rosemary Morrow’s “Earth user’s guide to Permaculture” and a concrete backyard in the inner city. I moved around a lot for the next few years and grew veggies in pots with varying levels of success. In 2006 I built a sustainable house and started my first real permaculture garden. Raised beds, swales, companion planting, worms, cow manure, etc.

I fit watering into my busy life, and it was rather sporadic. I watered every other day, sometimes every day, sometimes not for several days. Probably predictably, my successes were moderate. I grew all the simple things: lettuce, rocket, sunflowers, potatoes, cherry tomatoes, silverbeet and spring onions.

Irregularly I managed to get small harvests of eggplants, pumpkins, carrots and corn. None of these efforts were a roaring success, but it was enough to keep me excited and motivated to grow my own food.

Since my experiences with Hugelkultur, besides the composting nature of the hugels themselves and better planning, I believe the real success came from my efficient use of water.

So I thought I would discuss my water saving strategies and my successes and failures.

The advertising on the box says that hugelkultur is water efficient, and in some examples the hugels were NEVER watered and produced a mass of plants that survived near-drought conditions.

The reality is a bit more complex. Yes, you can grow lots of plants without watering, however, the quality of your produce is variable without regular water.

The first thing to note is that where I live, the rainfall is pretty good, and last year we had a reasonably wet summer. That said, I was very satisfied with how the hugels performed.

A good general guideline of how much to water is that plants need an inch of water per week.

My watering habits over my first summer were:

This meant that if we had enough rain, I did not water the hugels for over a month. During a dry spell of no rain for two weeks, I watered the hugels once at the end of that time. I used a pot of hardy herbs (like oregano) on the tops of the hugels. When they started wilting, then it was time to water.

The longest period the hugels went without manual watering was 6 weeks. The shortest period between watering (dry spell) was two weeks.

In my first year of hugelkultur, I mulched my garden, and watered very rarely. Once plants were established, I watered only when absolutely necessary. I was very sick at the time, and once the beds were planted, I pretty much neglected them. I was also interested in how far I could push the hugel theory and see if the beds still performed.

We had a reasonable rainfall that year, and I watered each hugel once a month, except for the hottest part of summer, with temperatures between 36-42°C, when I watered fortnightly. Over winter I think I probably watered once.

My plants grew, they survived and I was astounded by the water efficiency of the hugels. I did notice that although I achieved the best crop I’d ever had, some plants really wanted more water than I was giving them. In some cases, the tops of the hugels became quite dry and the worms and soil organisms abandoned them for deeper, moister homes. The plants had developed quite deep and substantial root systems, but the soil itself was suffering.

In my second year, I dispensed with mulch (see war on slugs) and I made a rule never to water less than fortnightly, even if it rained. In the beginning the hugels get a lot of water during construction. This water “charges” the hugels (like charging a battery). In the second year, you are without this initial charge, so it’s important to maintain the level of moisture in the upper levels of the hugel to keep the worms and microorganisms happy. Happy soil, happy plants.

When establishing plants, they receive enough water, and this partly charges the hugel. Once the plants are established, I then water every week unless it rains substantially (10-20mm in a week), but no more than two weeks between waterings. I water one hugel each day for 20 minutes, plus one perennial / fruit tree bed. That amounts to about 40 mins for five days each week. All up, that’s about 3.5 hours of watering each week.

Each of my hugels covers about 7.2 m2. In a week, each square meter requires about 21 litres of water. That’s roughly 14 watering cans, each takes 2-3minutes to fill, so I should be watering for 40 minutes per hugel each week.

Using hugelkultur, once my plants are established, I cut my watering time and water volume in half, and this is without the benefits of mulch. As it is, I don’t hand water, but set up a sprayer on a hugel, then go about my pruning, weeding and harvesting tasks, so that accounts for a good 40 minutes of gardening time five days per week.

Mulching: straw is your hugel friend (sometimes)
I’ve never been a fan of mulch:
•    it stops seedlings from coming up
•    makes cosy homes for slugs
•    you have to water for a lot longer when you do water (to penetrate the mulch).

Because of the erosion vulnerability of the hugels, when I first build or rebuild a hugel, I often use straw mulch to stop the rain from washing away the growing medium during a downpour (because here, when it rains, it pours).

In my first year, I was a big fan of straw mulch:
•    it is the perfect erosion control on the steep sided hugels
•    it protects the hugel from too much evaporation
•    It can be used to shape and stabilise the mound and create little “balconies” for growing things in (sort of like vertical gardening on the really steep sides of the mound).

Unfortunately, mulching gave rise to the…

After the first year of limited destruction by slugs, the proliferation of slugs in my garden in the second year was such a problem that I could not protect any seeds or seedlings for the first month of spring.

Eventually I waged a substantial war on all things slimy, and finally managed to get some seedlings establish in mid October, but spent the better part of the summer getting the slug problem under control.

I now have a kill on sight, and hunt and destroy policy to reduce the slug population, and I’ve mostly had success, but still have to stay vigilant. As part of my anti-slug strategy, I have dispensed with most of my use of straw.

I still use straw to stabilise a newly built hugel, but cover it completely with a layer of cow manure to prevent slugs living or breeding in it.

So, it’s up to you if you want to use mulch, but I now avoid it completely as the negatives outweight the benefits.

Tyswan is a writer, artist, illustrator, and gardener.
View all posts by Tyswan